Serving the Tuscaloosa, AL area since 2012. 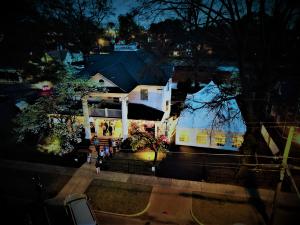 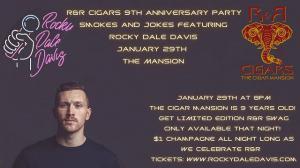 Help us celebrate our premium cigar shop at The Cigar Mansion. Limited edition swag available only at the party. One dollar champagne all night long.”
— R&R Cigars Instagram

TUSCALOOSA, ALABAMA, USA, January 25, 2021 /EINPresswire.com/ — On Friday, January 29, 2021, premium cigar shop, R&R Cigars, is celebrating the 9th year since they created The Cigar Mansion at the Maxwell House in Tuscaloosa. They are proud to be the only whiskey bar in Tuscaloosa and one of the few premium whiskey bars in the state of Alabama.

R&R Cigars has been offering premium brands, boutique brands, and well-aged spirits to the Tuscaloosa area since 2013. There are over 1,000 different options and more than 80 different beers to choose from. The company’s website invites people to “relax and recharge” as patrons enjoy the R&R experience.

The theme of this year’s anniversary party is “Smokes and Jokes” and will feature national comedian, Rocky Dale Davis. Davis, an Alabama native, has appeared on networks such as NBC, E!, MTV, EPIX, and Comedy Central. Most recently he was a contestant on Bring the Funny on NBC, and Dating No Filter on the E! network. He has also appeared on Hart of the City by Kevin Hart and Greatest Party Stories Ever on MTV.

The rich history inside this premium cigar shop can be felt immediately upon arrival. The Maxwell House is an historic mansion built in 1903 that was owned by the Maxwells. It is listed in the historical registry in Alabama. Part of its history is that it is the first home in Tuscaloosa to have electricity and indoor plumbing. Today, it is home to the expansive humidor, premium cigar shop, premium cigar lounge, and fine whiskey bar that is R&R Cigars.

The stately architecture and grandiose style of the mansion is what makes it one of the most unique venues in the Tuscaloosa region. The expansive southern style wrap-around porch with the magnificent white columns is the highlight of the building. All of the woodwork inside the mansion is original. The first and second levels hold different cigar lounge areas. This offers plenty of space for social distancing.

Enthusiasts can check out one of two exclusive boutique brands at the R&R premium cigar shop. The Black Warrior and the Casa de las Estrellas were created by one of the company’s founders after a visit to the Rocky Patel Factory in Honduras in 2012. While he was there, the factory made him a signature blend. This blend was named The Black Warrior. The second exclusive brand, Casa de las Estrellas, is a milder version.

Attendees of the R&R Cigars 9th Anniversary Party can get limited-edition R&R swag that is only available that night. One dollar ($1) champagne will be available all night long. The Cigar Mansion is so expansive that guests can enjoy the comfort of a premium cigar lounge while remaining safe.

It’s easy to understand why people love this place. Visit R&R Cigars and the Cigar Mansion at 2703 6th St., Tuscaloosa, AL 35401. It is a premium cigar shop that is truly memorable.

Check out the website at TheCigarMansion.com. Follow them on Facebook @RRCigars. Visit them on Instagram @RandRCigar for more information about the Smokes and Jokes Anniversary Party on January 29, 2021. Tickets to the party can be purchased online at EventBrite.