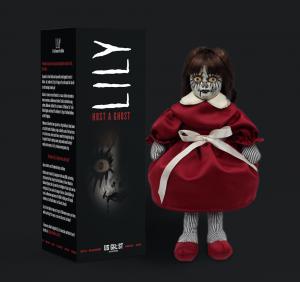 Lily: Host a Ghost this Halloween 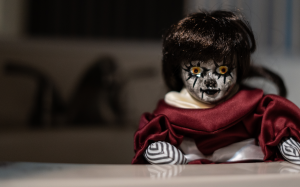 She wards off ghosts and ghouls 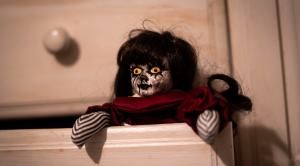 Use Lily this season to ward other ghosts and ghouls around Halloween.

NEW YORK CITY, NEW YORK, UNITED STATES, September 15, 2020 /EINPresswire.com/ — This October, set the mood by welcoming a new friend into your house. Her name is Lily, and she’s a haunted doll and effigy, following a Viking tradition to ward off evil spirits. She is modeled after the Countess Elizabeth Báthory, commonly referred to as the female Dracula. She is surprisingly good at both warding off ghosts and scaring your friends. Lily was sent to the team at US Ghost Adventures by a woman who found her at her doorstep one morning and took her in. She came with a warning, which, in part, read, "do not put her by mirrors or in the same room you sleep in, she likes red, that is all I know." She was known to turn lights on and off, create smells of burnt toast, and move around on her own. After sharing the story on social media, people started requesting their own Lily – usually to scare others in their household.

With feedback from Lily’s previous host and some creepy discovery of their own, US Ghost Adventures created instructions for everyone to enjoy and use Lily. She works well hidden in a wreath, on a shelf, and in other nooks to scare your family, roommate, or co-workers, while keeping more harmful ghosts at bay. Lily: Host a Ghost is the “Elf on the Shelf” for Halloween season to ward off other ghosts and scare your friends!

Lily’s Background
The old Viking tradition of warding off ghosts with an effigy at Halloween was imported to Lower Manhattan by Dutch Settlers. The custom of using Lily to ward off ghosts at Halloween is made new again by US Ghost Adventures.

Upon researching the doll's origins, she was crafted to mimic the infamous Elizabeth Bàthory. She was a noblewoman condemned in the 1600s for killing over 650 people, and is referred to as the 'Blood Countess' and 'Countess Dracula.' Lily contains part of the Countess' menace. Lily is a limited-edition doll reproduced alongside the original Lily. She's the best way to spice up the spirit of Halloween season in your home, and the perfect gift, as she can both protect and haunt!

About US Ghost Adventures
The national ghost tour and entertainment operator started on the East Coast. They offer nightly in-person tours in over 20 cities across the United States. Tours are open in most cities, with safety measures in place. With a focus on history and hauntings, the in-person tours are popular with destination visitors as well as locals, families, private groups, and education groups. From Salem, and its witch trials to Greenwich Village, Chicago, Los Angeles and Seattle, you are never far from a US Ghost Adventures experience.

Junket: GPS Guided Audio Ghost Tours
US Ghosts Adventures tours are now on Junket, available on iOS and Android devices. Junket is a virtual experience platform that lets guests take GPS guided narrated tours, turning your phone into your personal tour guide. This allows people to take a tour when they want, how they want, with whom they want. They can also explore the haunted locations from the comfort of their own homes.