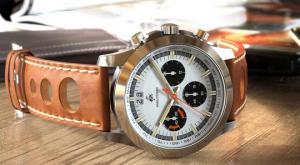 The Parker Chronograph is named after Captain John Parker, who commanded troops at the Battle of Lexington in 1775. 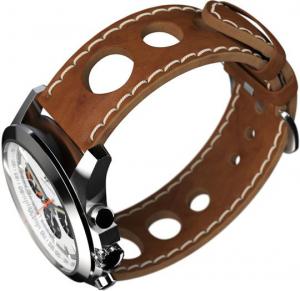 A portion of the proceeds from each Minuteman Watch sold in 2019 benefit post-9/11 US veterans. 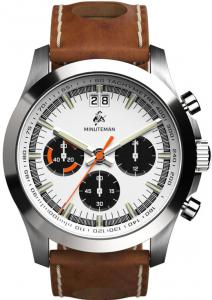 The Parker Chronograph comes in a variety of colors, including the striking black-and-white “panda” dial.

We are honored to be able to bring these fine warriors a little bit closer to owning their own homes with each watch we sell this year.”
— Thomas Carey, Minuteman Watch Company

The Parker Chronograph is named after Captain John Parker. Parker commanded the Lexington Patriot colonial militia at the Battle of Lexington on April 19, 1775. The watch features a variety of different color options for its face (including the beautiful “panda” black-and-white face) and is hand-made in the USA by Minuteman Watch Company.

The Illinois-based watch manufacturer recently selected Homes For Our Troops to be its 2019 nonprofit partner. That means a portion of all sales of Minuteman watches for this year (including the new Parker) will go to help Homes For Our Troops build adaptive homes for severely injured post 9/11 veterans. The company hopes to raise $10K for the charity through sales of its 2019 watches.

“Helping our veterans is one of the core principles of our company,” says Minuteman Watch Company owner Thomas Carey. “We are honored to be able to bring these fine warriors a little bit closer to owning their own homes with each watch we sell this year.”

Born in 2012 as an offshoot of The CGA Company, Minuteman Watch Co. has made supporting veterans a key part of its history. Each year, the company chooses a charity that works with veterans and their families as its fundraising partner.

“Everything we do is a salute to this great nation and the people who help defend it,” says Carey. “When our customers look at their watches, we want them to see more than just the time. We want them to see what makes this country special. Pride, precision, dedication and compassion – that’s what goes into each Minuteman watch.”

About Minuteman Watch Co.:
Minuteman Watch Co. was born in 2012 for three reasons: to create beautiful, hand-crafted, American made watches that will stand the test of time; to raise money for worthwhile charities that support veterans and their families; and to provide work for Americans. Those three principles have guided us every step since then, as Minuteman watches have raised thousands for charities. To find out more about our watches and our mission, go to www.minutemanwatches.com.

Check out how Minuteman watches are made!